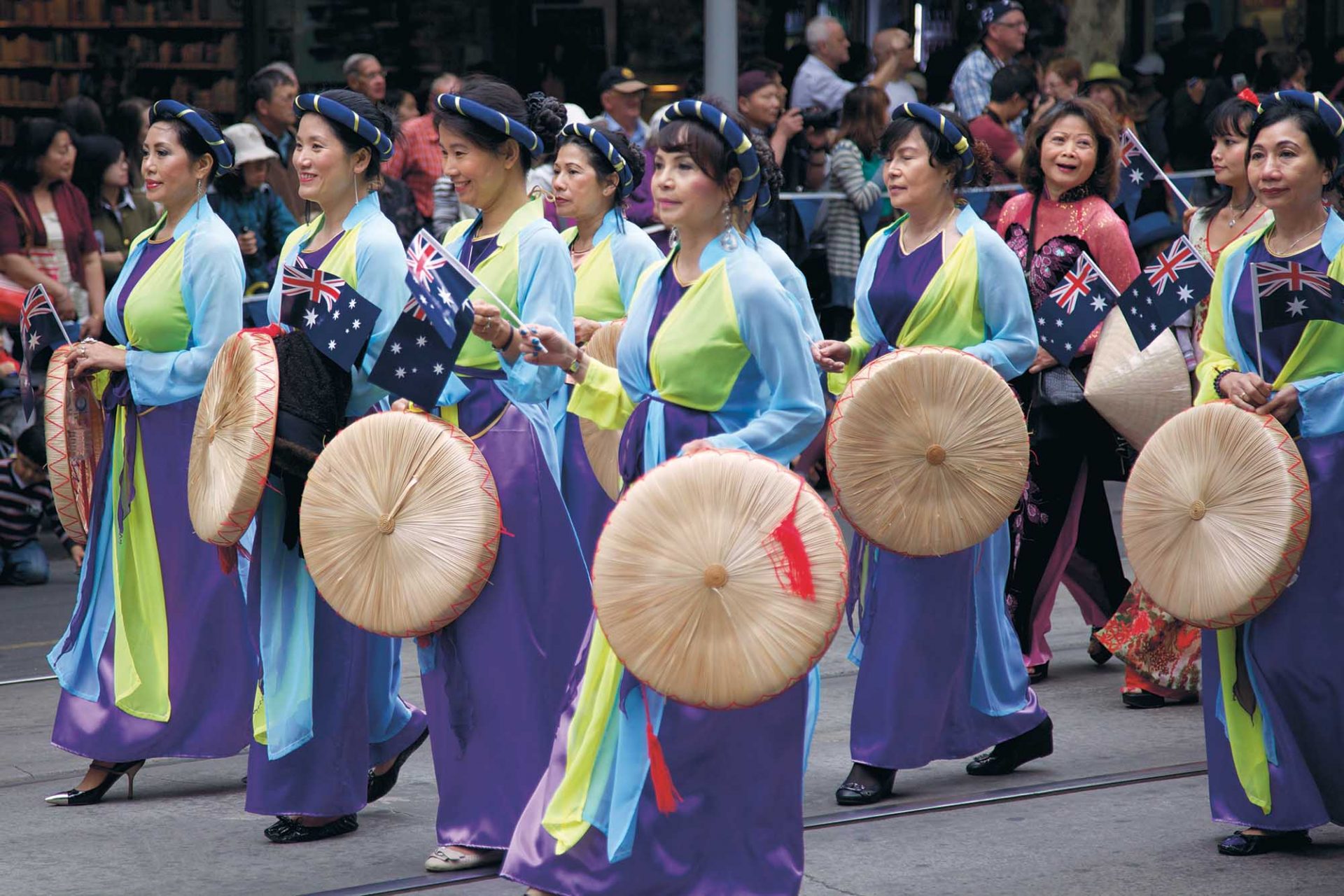 Just as the gender conversation has shifted the dial for representation of women in leadership and has helped shape policies that impact women’s lives, so too can a conversation on culturally diverse leadership help innovate Australia’s policies.

Australia’s culturally diverse population is drawn from more than 300 ancestries and is visible in everyday life. This is why Australia is often lauded by its political leaders and commentators as one of the most successful and harmonious multicultural nations in the world. While there is much truth to that statement considering all of Australia’s successes made in the context of its diverse population, this confident, veneer also disguises an inconvenient truth.

As soon as one views the leadership circles of many major institutions in Australia, the rich tapestry of cultures and ethnicities of representation suddenly disappears. Instead, the leaders of Australia continue to be dominated by people, mostly men, of Anglo-Celtic background. The Australian Human Rights Commission identifies that no more than five per cent of leaders across Australian businesses, politics, government and civil society are people from non-Anglo-Celtic or European background. This contradiction is notably acute in Australia’s most public and visible institutions: politics and the media.

The deep-set circle of networks, entrenched views on leadership styles and structures of traditional Australian institutions have created many systemic barriers for diverse voices to be heard and included. This is a significant loss of opportunity because there is a wealth of culturally diverse talent that remains somewhat untapped. This talent could assist Australia in navigating and communicating the many challenges faced in an uncertain and rapidly changing world.

Cultural diversity is often publicly promoted as part of Australia’s DNA. As Prime Minister Malcolm Turnbull puts it, Australia is the “most successful multicultural society in the world. There is no other country that has done so well at this as we have.”

But is it fair for Australia to showcase itself to the world as the most successful multicultural nation, if diversity is not visible in our public discourse? For instance, Screen Australia found that within Australian television dramas broadcasted between 2011 to 2015, only 18 per cent of main characters were of non-Anglo Celtic background.

More glaring within senior positions of decision making in Australia’s major institutions is the invisibility of people of colour. For example, if one were to review the current composition of the Australian Parliament to which the Prime Minister belongs to, an overwhelming 79 per cent of the total 226 elected politicians are people of Anglo-Celtic background. Politicians of Asian heritage make up less than four per cent.

The Australian Human Rights Commission investigated this systemic issue in their report Leading for Change: A blueprint for cultural diversity and inclusive leadership, and identified significant under-representation of people of cultural diverse backgrounds in Australia’s top 200 publicly listed companies, government departments and ministries, and universities.

This serious omission downplays the importance of immigration to Australia’s history and future. Australia has been a nation that has welcomed migrants and refugees from around the world since the Second World War.

The key role that Australia’s immigrants played in this economic achievement cannot be taken away. What is also remarkable is the level of social harmony maintained in Australia. In the 2016 Scanlon Foundation report, Mapping the Social Cohesion Survey, 83 per cent of people surveyed believed that “multiculturalism is good for the country”, and 59 per cent of people believed that the current levels of immigration are either “about right” or “too low”.

Despite this, the exclusive nature of Australia’s leadership, particularly in politics and the media, is contributing to fragmenting social harmony by highlighting differences rather than promoting inclusivity. One example is the fierce public debate regarding the inability of certain groups in society to embrace the “Australian way of life”, which is being spurred by the global policy debate on migration. This has heightened internal tensions in Australia on how change brought by immigration and globalisation will impact the economy and society.

To strengthen social harmony and redress these debates that fuel negativity and exclusion requires conviction from Australia’s political and media leadership. It requires empathy and the embrace of other cultures, which is gradually occurring although slow in progress.

Michelle Guthrie, the recently appointed Australian Broadcasting Corporation managing director who is half-Chinese with experience of living in Asia, recently commented on this subject. She argued that to remain relevant the national broadcaster must look “to embrace diversity amongst our staff, on our screens and behind our cameras and microphones”.

“If the ABC is to remain relevant to audiences as we move towards 2020 and beyond, then the ABC must reflect the geographic, demographic and socioeconomic differences. And, of course, ensuring the widest possible breadth of viewpoints in our programs and on-air personalities,” said Guthrie.

It was refreshing for many to hear a senior leader of a major media institution calling out for diversity and inclusion. The ABC has now introduced a series of targets by 2018 including 15 per cent of senior executives and up to 12 per cent of content makers coming from non-English speaking backgrounds.

Why are culturally diverse perspectives, stories, voices and faces on our screen important? It is important because we need to recognise and reflect the modern Australian audience. As Guthrie pointed out: “We are living at a time of significant population inflows – not only through settlement programs but through our workforce and education systems.”

This century is witnessing great changes in the world, including Asia becoming the largest group of consumers worldwide. The global middle-class population is expected to increase from 1.8 billion in 2009 to 3.2 billion by 2020, with the bulk of the growth predicted to come from Asia.

As a result, Australia’s political leaders are already beginning to refocus foreign, security and economic priorities towards this part of the world. Some progress was made back in 2012 in the Australia in the Asian Century White Paper, launched by former Prime Minister Julia Gillard. It identified 25 national objectives for the Australian government to achieve by 2025 to take advantage of the Asian Century and lift Australia’s productivity into the world’s top 10 GDP per capita. Notably, the White Paper’s objective number 14 focused on developing “Asia-capable leaders, workplaces and institutions” who would have deeper knowledge and expertise of countries in the region with the greater capacity to integrate domestic and international issues.

The reordering of power relationships and the development of the Asian Century White Paper presented a compelling case for Australia’s political and media leaders to be more inclusive of its Asian Australian communities, many members who inherently have the cultural experiences, skills and knowledge to drive the strategy to develop Asia-capabilities.

Unfortunately after Gillard lost the prime ministership the White Paper was de-prioritised. And with this de-prioritisation Australia has lost another opportunity to capitalise on the existing talent within the country and to utilize our culturally diverse population – to help seize the economic and social opportunities from a rising Asia.

Although the White Paper to a large extent has been politically shelved, its strategic objectives continue to be recognised in Australia’s corporate sector. Over the past years or so, the result has led to initiatives to proactively promote people of culturally diverse backgrounds into senior management roles who can bring relevant cultural and market experience to help their businesses innovate and succeed.

Shifting the dial on public discourse

Networks comprising of culturally diverse people are also collaborating to sustain the momentum of the White Paper. The aim is to encourage civic engagement by promoting diverse voices and role models to share their views on shaping the future of Australia.

DAWN is one such organisation that is working to shift the dial on public discourse. It was established to represent Asian Australians and people interested in fostering more diversity and inclusion within mainstream institutions. It aims to raise awareness of the importance of diversity in leadership and to encourage and inspire “Australasians” to take up leadership roles.

It remains a great challenge for Asian Australians as well as many people of colour to engage in traditional political and media circles. For example, different cultural and social norms may lead to misguided perceptions of leadership capability. In some cases the Asian Australian’s networks may be limited and there may be communication difficulties that impact on confidence and willingness to participate.

In light of these issues, DAWN established the Asian Australian Leadership Conversations, a series of public forums showcasing people of culturally diverse backgrounds discussing a range of public topics. The format leverages social media and traditional mainstream institutions such as the Asia Society, St James Ethics Centre and Westpac to get culturally diverse people to break through the “bamboo ceiling” and have a public platform to voice their views. At the Q&A style panels which are broadcast via YouTube, the audience members are also encouraged to share ideas on the relevant topic at hand.

In August 2016, DAWN and the Asia Society hosted a conversation on the topic of diversity in politics with speakers including the recently appointed NSW Premier Gladys Berejiklian, NSW shadow education minister Jihad Dib, ABC journalist Kumi Taguchi and the Australian of the Year David Morrison. Taguchi joked that this was the first panel she experienced where she was not the only one with the “funny name”. Dib said that Australia had not fully harnessed the human asset that our culturally diverse community has to offer.

“To navigate through this uncertain time – economy, strategy, and foreign policy, we have to sharpen our tools and look inside our capabilities – inside our community. Political leadership in a democracy like Australia is an important first step,” said Dib.

The conversations are one of many initial steps to engage diverse audiences in public discourse, not as passive participants but as proactive commentators to demonstrate that there are new people who are willing to participate in politics and media in an inclusive environment. The result has been that some panelists of the conversations are now gained public exposure and have been interviewed by traditional media channels.

For the vital debate to mature and be inclusive, our political and mainstream institutions must reflect the population that we have. Just as the gender conversation has shifted the dial for representation of women in leadership and has helped shape policies that impact women’s lives, so too can a conversation on culturally diverse leadership help innovate Australia’s policies in areas such as multiculturalism and strategic priorities in the Asian Century.