The economic transformation of South-East Asia is led by extraordinary but practically invisible women entrepreneurs. How can the region’s leaders unlock their potential and share their remarkable story?

The rise of China and India in the last 20 years has rightfully attracted much attention from businesses, economists and policymakers, but has drawn attention away from the quiet economic disruption occurring in South-East Asia. This disruption has been led by an extraordinary but practically invisible sector: women entrepreneurs.

People are the most important resources of any economy or business. Among the different types of human capital, the entrepreneur is the only resource that takes risks and marshals other financial, physical, technological, and intangible resources for creative, productive and profitable use. The global economy, however, has not been optimising its human capital. In 2015, the average labour force participation rate across all countries in the world – which includes all people engaged in productive economic activity as employees or employers – was only around 60 percent. However, South-East Asia exhibited the highest labour force participation rate among all regions at 68 per cent (Figure 1).

The business or economy best positioned to grow and develop is one that optimises its labour resources and particularly its entrepreneurial talent. This is where South-East Asia shows the most remarkable leadership, exhibiting the highest proportion of both female and male entrepreneurs in the world in 2015. The significant role of entrepreneurship in the region is validated by the fact that all the national economies are predominantly driven by micro, small and medium enterprises (MSME s): the engine of South-East Asian economic growth. However, national governments have only recently begun systematically gathering statistics on women entrepreneurs; therefore, the importance of their economic contributions and indeed their sheer economic potential are just beginning to come to light.

While the role of male entrepreneurs in the region must certainly not be underemphasised, it is crucial to highlight the distinctiveness of South-East Asian women entrepreneurs and the unique nature of their influence. This offers insights into the quiet, creative disruption occurring in the region, and allows a glimpse into the socio-economic future of South-East Asia. 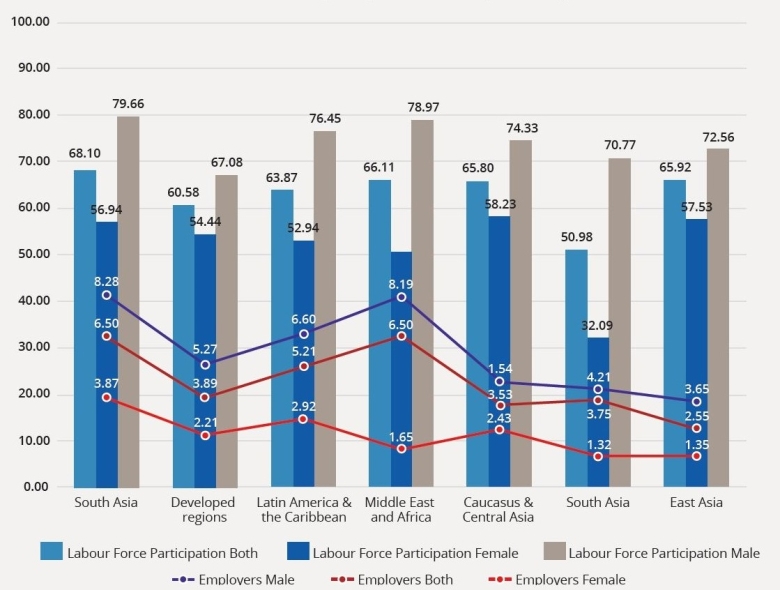 Succeeding against the odds

Perhaps what makes South-East Asian female entrepreneurs most remarkable is the fact that they have grown in numbers despite considerable odds. Data shows that women’s entrepreneurial activity in the Philippines, Thailand, Indonesia and Vietnam (averaging at around 17 per cent) is practically double that of India (eight per cent) and China (nine per cent). The high rates of entrepreneurial activity in these South-East Asian countries is surprising, given that women across the region face tremendous challenges in establishing and operating enterprises.

First, South-East Asian women do not necessarily possess the adequate time, energy and focus that entrepreneurship requires. Women continue to be primary carers of children, the elderly, and even siblings and extended family. These responsibilities require a substantial amount of time and offer little flexibility particularly among women with school age children.

Furthermore, these deeply rooted and widely held gender role expectations have created a social environment with poor childcare and aged care infrastructure. The establishment of out-of-home care facilities is not considered a priority government service or a viable business option precisely because women are expected to assume this role at home.

The expectation to care for the family along with poor infrastructure outside the home make it extremely difficult for women to pursue conventional career options. Furthermore, flexible work arrangements are simply not the norm among South-East Asian organisations, and high performing employees continue to be associated with physical presence in the workplace. Finally, the technological infrastructure in the region (e.g. internet connectivity) is typically not viewed by businesses to have the level of quality and robustness required to support a remote workforce. The confluence of these factors has the effect of slowing down women’s careers, or indeed locking them out completely from traditional workplaces.

The same environment that limits traditional employment options for women likewise limits the capacity of women to conceptualise, establish and manage innovative enterprises. Consequently, women-owned enterprises are fewer in number and are less innovative compared to enterprises led by men. Despite being significantly time-poor, women turn to entrepreneurship out of necessity (by contrast, male entrepreneurs tend to be motivated more by opportunity). Women entrepreneurs augment family income by managing their businesses part time, while also attending to the bulk of family responsibilities. Notwithstanding the limitations in time and focus, women engage in entrepreneurial activity out of the sense of responsibility to care and provide for their families.

Second, entrepreneurial financing is difficult to secure. While access to financing tends to be limited for all entrepreneurs in the region regardless of gender, the issue is more marked in the case of women entrepreneurs. Banking products in the region tend to have conventional requirements for business loans, which include evidence of collateral and a track record of business profitability. This is reasonable for larger enterprises, but not very realistic for entrepreneurial ventures, particularly women-owned enterprises which are generally smaller with shorter track records. Women’s enterprises also tend to have more modest levels of financial performance, which means that they face much greater difficulties in accessing traditional bank financing products.

The banking sector in the region does not offer financing products specifically tailored to the context and needs of women-owned enterprises. There are, however, notable exceptions in Indonesia and the Philippines, where some commercial banks offer business loans targeted at women’s enterprises. These products have more streamlined application procedures and requirements, flexible collateral options, and customisable repayment schedules.

Additionally, the South-East Asian financial sector is smaller and much less developed compared to large Western investment and venture capital markets. Anecdotal evidence indicates that while some foreign venture capitalists have made investments in the region, investors eventually exit the market due to the inability of enterprises to scale up according to expectations. Unfortunately, these enterprise performance expectations are benchmarked mainly on investor experience in developed country contexts and are generally not adjusted to account for the emerging market conditions of South-East Asia. Locked out of traditional banking products and faced with very limited capital options, women entrepreneurs in the region thus tend to rely on informal sources of financing, including family, friends, colleagues, and angel investors (who also tend to be women).

Third, there is very little infrastructure designed to scaffold the growth of women’s enterprises. While governments generally have programs in place to support micro enterprises and start-ups, there is less focus on helping existing women entrepreneurs sustainably scale up their businesses to small, medium and indeed large enterprise status. Consequently, studies have shown that women’s enterprises in South-East Asia are less likely to grow or engage in exporting and other international business activities. Notable exceptions are Indonesian women entrepreneurs, who are almost three times more likely to export compared to men. The lack of infrastructure to develop and upskill women entrepreneurs is further evidenced by the widespread lack of confidence among women in their own entrepreneurial abilities.

Despite these overwhelming odds, women across the region continue to perceive opportunities for entrepreneurship and are generally undeterred by fear of entrepreneurial failure. While remaining few in number compared to men, the number of women who intend to pursue new or existing entrepreneurial ventures across South-East Asia is expected to grow. This means that the contribution of women entrepreneurs to regional development can only be forecasted to increase over time.

A clear contribution is in employment and job creation. Entrepreneurs constitute the bulk of economic activity in the region and are responsible for generating up to 60 per cent of jobs across industries in their respective countries. Women entrepreneurs have particularly exhibited a dominance in the South-East Asian wholesale and retail industries. In Vietnam, there are more women entrepreneurs in agriculture and mining, and in Malaysia and Indonesia, there are more women operating manufacturing and transport enterprises. In the Philippines, women-owned enterprises dominate the financial, professional and consumer services sectors.

However, perhaps the most notable characteristic of women entrepreneurs is that they tend to not only pursue economic gain but also strive to make a positive social impact through their enterprises. This has been validated by scholarly research and helps explain why women-owned enterprises dominate the health, education, and social services sectors in Thailand, Vietnam and Indonesia. Indeed, women’s entrepreneurial activity focused on providing these services in Indonesia is double that of male entrepreneurs.

The concern for both positive economic and social impact lies at the heart of the quiet, creative disruption led by the increasing number of women entrepreneurs in South-East Asia. Case-based evidence from ongoing research in the region indicates that women entrepreneurs tend to channel economic gains from their enterprises to support their role as carers. Women establish enterprises primarily for the benefit of the family. Income is directly used to provide better education for their children and to create personal and professional development opportunities for family members.

Further case-based evidence shows that women entrepreneurs have a strong orientation towards creating novel business models designed to maximise business benefits across partner networks (for example, integrating farmers into the supply chain to increase farmers’ profit margins while ensuring reliable supply of raw materials). Women entrepreneurs tend to employ other women and actively work with families and communities to ensure that women are not excluded from the workplace. This has important implications on increasing the overall participation rate of women in the labour force.

Finally, evidence shows that economic gain does not necessarily take precedence over social impact, with women entrepreneurs constantly striving to achieve both objectives in equal measure. Remarkably, women entrepreneurs express fulfilment and satisfaction despite lower-than-expected enterprise economic performance if they perceive that their businesses have made a positive impact on their family and the community.

The high participation rate and key socio-economic contributions of South-East Asian women entrepreneurs (all in the face of overwhelming odds) is slowly coming to light as governments and international agencies begin to systematically gather gender-disaggregated statistics on entrepreneurial ventures. It is becoming increasingly clear that women entrepreneurs have been a powerful invisible force at the forefront of creative social and economic disruption in the region.

Yet, there is much that remains to be done to collect the most basic data on women entrepreneurs, including a precise count of women-led enterprises, the industries in which they operate, their social and economic contributions, growth/exit rates, and their entrepreneurial needs. It is only with more robust data that women entrepreneurs can truly be made visible to policymakers tasked with allocating resources to support them.

Recent studies on women entrepreneurs (albeit conducted in developed country contexts) indicate that women are differently motivated and thus tend to approach business activity differently compared to men. The bottom line is that the roles that women play in their families and communities create life experiences that help determine their unique personal, career and business outlooks. While studies have highlighted the uniqueness of the woman entrepreneur’s ecosystem, there continues to be a large gap in understanding the nature of this complex, multi-stakeholder network and its role in shaping women’s entrepreneurial activity in South-East Asian countries.