Building a sustainable future for the New Colombo Plan The New Colombo Plan is deepening Australia’s ties with the ASEAN region and delivering long-term benefits to Australia. But it needs a unified, national approach to grow its scale, reach and impact.

In 2014, the Federal Government launched a visionary scholarship pilot program named The New Colombo Plan (NCP) with the bold aim of providing a new generation of Australians with practical experience living, studying and gaining workplace skills in the Indo-Pacific region. Designed as a ‘reverse’ Colombo Plan – a post-World War II initiative under which Australia for the first time provided scholarships to students (and future leaders) from South and South-East Asia to study in Australia’s universities – NCP’s ambition is to develop the next generation of Asia-connected Australian leaders.

Just four years later, 434 NCP scholarships have been awarded to Australia’s best and brightest undergraduates while 31,114 students have undertaken short term study mobility programs. By the end of 2018, 31,548 young Australians will have visited and studied in the Indo-Pacific region under the program.

This is remarkable progress for a relative new initiative. The legacy of the NCP will be immensely positive for the next generation of Australians as they advance our nation’s engagement with the Indo-Pacific region.

Now that the NCP program has reached maturity and scale, it requires strong business community and bipartisan political support to enable it to deliver its long-term dividends to Australia and to continue to demonstrate Australia’s interest and commitment to the region. 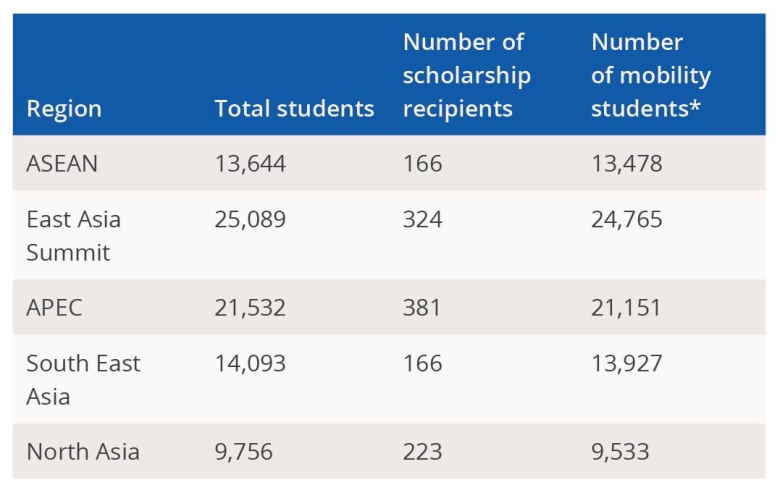 The 10 member states of the ASEAN are popular destinations for NCP students with 177 scholars having completed or currently undertaking studies and another 13,478 students on mobility programs in the region. Singapore and Indonesia are most favoured, followed by Malaysia and Thailand. All ASEAN member countries have hosted at least one of our students.

For the past three years, I have had the great pleasure to sit on the interview selection panels for NCP scholarship applicants including most recently for the 2018 ASEAN intake covering Malaysia, Thailand, Vietnam, Cambodia and Myanmar.

I am immensely impressed by the quality and diversity of these incredibly talented young Australians. They are young, mostly ranging between 20 and 22 years old, yet they average high distinction results and they are highly engaged in university and community service activities.

These wonderful students hail from cities all across Australia, including from lower socio-economic background communities. Female participation is incredibly high – for the ASEAN 2018 cohort, a majority of scholars were women. Students of all cultural backgrounds are represented, including Indigenous Australians. There are efforts underway to continue improving the diversity and inclusiveness of the program and student cohorts.

Singapore Prime Minister Lee Hsien Loong said during his address to the Parliament of Australia on October 12, 2016:

“I am glad that Foreign Minister Julie Bishop had the vision to champion the New Colombo Plan. By the end of this year, Singaporean universities will have welcomed some 800 Australian New Colombo Plan students. They will continue the spirit of exchange and build and renew connections and goodwill between our peoples into the next generation.”

Former Malaysian Prime Minister Najib Razak, in his Joint statement with former Prime Minister Malcolm Turnbull, November 22 2015 reflected on the fact that many Malaysians were educated in Australia under the Colombo Plan, and the new initiative provided a much needed platform to build greater understanding between the nations and cultures.

Young Australians are also clearly benefiting from their NCP experience. A number of students interviewed gave a sense of the quality of the NCP program and the legacy it is leaving for Australia in the Indo-Pacific region. For example, Joel Adsett is currently completing his final semester of a Bachelor of Business (Finance)/Bachelors of Laws (Honours) dual degree from Queensland University of Technology. In 2015/16, as a New Colombo Plan scholar, he studied international business and Asian Studies subjects at Universitas Bina Nusantara in Jakarta, Indonesia. He also interned with Cardno Emerging Markets and the Australia Trade and Investment Commission in Indonesia, and with ANZ Banking Group in Singapore. Joel starting working with a global strategy consulting firm in Sydney in 2018.

A major focus for DFAT and universities is creating a community of NCP Alumni as advocates and ambassadors who understand and appreciate the responsibility to encourage others to participate in the program and give back” to the Australian community at large.

Creating a sustainable future for the NCP

The success and longer-term impact of the NCP will depend on the support it receives from the Australian community and our regional partners.

Business has a key role to play. The ASEAN region is, and will always be, important to Australian companies. When aggregated, ASEAN represented Australia’s third largest trading partner in 2016, while Australia was ASEAN’s sixth. In 2015, two-way trade amounted to more than $90 billion and two-way investment totalled around $227 billion.

Many of Australia’s largest listed companies, including in finance, transport and logistics, healthcare, education and property sectors have established a permanent presence in the region. ANZ, Macquarie, Lend Lease, Linfox, Bluescope, Telstra and Blackmores are just a few iconic Australian names actively investing and operating in South-East Asia.

Future success in the ASEAN region will require a highly skilled workforce with in-country experience and relationships. The NCP is an ideal platform for Australian companies to identify and attract exceptional Australian students who have studied in some of the leading universities in the region.

Of the total scholars who have completed or have been awarded their NCP scholarship, around 86 per cent have undertaken internships with local or Australian organisations. But the demand for internships outpaces supply.

To date, many companies including KPMG, have answered the call and provided valuable internship experiences. Given the large number of students and the diversity of skills, more Australian and foreign companies and institutions across a wide range of sectors need to get involved in the program through the provision of professional placement opportunities to NCP scholars.

In 2015, then foreign minister Bishop announced the initial NCP Business Champions cohort, of which I am honoured to serve. Its aim is to develop a network of business and community leaders committed to the NCP and its cause to serve as Ambassadors for the program. In late 2017, the group was expanded significantly to include some of Australia’s most prominent and passionate leaders.

Respected Australian business leader, Kevin McCann, who is the national vice chair of the NCP Reference Group (alongside Professor Sandra Harding) has been deeply involved with the program since its inception and wants Australian companies active in the Indo-Pacific region to help ensure NCP’s sustained growth.

Interviewed for this essay, McCann said:

“The New Colombo Plan has enabled over 30,000 Australian students the opportunity to undertake cross disciplinary field work and mobility programs in Asia and the Pacific. It has the enthusiastic support of Australian students for its relationship building with, and benefit to people in the host countries.”

Having leadership, funding and national purpose in place, what are the key ingredients for the NCP’s sustainable future?

1.  The program deserves a non-partisan political support. For the NCP as a nation-building project to achieve its multi-generational impact, it requires the commitment by all political parties to continue its funding and implementation.

2.  Those involved in the NCP (business champions, students, university mobility officers) need to continue promoting the program across wider Australian and regional networks. Its core message of building a new generation of Asia-engaged Australian leaders needs to be understood and accepted by Australian society at large.

3.  On a practical level, Australian organisations should be actively encouraged to provide work experience, internships and mentoring experiences for NCP students offshore.

4.  As a national endeavour, NCP needs to grow and diversify its funding base. A number of Australian firms for example PwC, have established named scholarships for NCP scholars of their choice. This practice needs to be encouraged as it creates mutually beneficial opportunities for the students, sponsors and the NCP at large.

5.  As Australia seeks to develop Asia skills and competencies to grow business connectivity with the region, Australian employers need to think of the NCP as an effective platform for future talent development and as a long-term opportunity to invest in Australia’s future leaders. See table below.

NCP is a national success story to be celebrated and empowered to grow. After decades of bipartisan agreement on the importance of building Asia competencies in our society for Australia’s future in the region, NCP has shown that this objective can be achieved. By building a cohort of Asia-literate and Asia-engaged Australian leaders, the program presents a real opportunity to deepen our national Asia literacy and broaden and deepen our expertise and networks in the region.

NCP deserves national support. But it will also require innovative, collaborative and entrepreneurial thinking on the design and future of the program to grow its reach and impact across generations and communities. As Australia refocuses its diplomatic and economic efforts on the Indo-Pacific, it is an opportune time to ensure this national project thrives and remains at the forefront of Australia’s engagement strategy for the region.

Speak truth to China without shouting